ESG and Aerosol inhalers: can health systems use environmentally sustainable treatments and still be truly patient-centric?

PatientView have released a first-of-its-kind report which reveals the patient perspective on the pharma industry and ESG. This blog shares one case study from the report and explores the tensions between environmental impact of treatments and the best possible experience for patients.

The aerosol propellants in certain inhalers used to treat respiratory illnesses (such as asthma and COPD) have long been recognised as damaging to the climate and contributing to global warming. With the environmental health of the planet high on the political agenda, and pharma companies placing greater emphasis on Environmental, Social and Governance (ESG) factors, attention has turned to mitigating the negative environmental effects of widespread aerosol inhaler use.

In contrast, dry-powder inhalers (DPIs) and soft-mist inhalers (SMIs), do not use HFC propellants, producing only 20g of CO2 eq. per DPI dose, and, as such, are presently considered the most promising environmentally conscious alternatives.

The NHS is now advocating DPI usage as a preferred substitute to pMDIs, and multiple countries in the European Union have already made large-scale switches to low-carbon DPIs; Sweden switched as early as the 1990s. In 2017, 70% of all inhalers used by patients in England were pMDIs, compared to just 13% in Sweden. A 2019 study estimates that if the Swedish pMDI/DPI distribution was applied to England, the result would be an annual reduction of 550 kilotonnes CO2 eq. 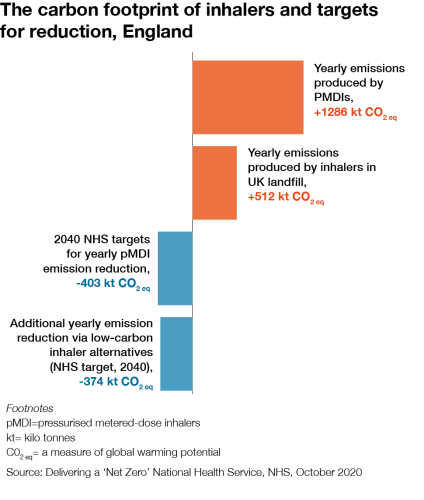 Asthma + Lung UK, one of the UK’s largest and most well-known respiratory-conditions patient groups, has raised concerns that the switching of inhaler types might compromise the quality of care for patients with a respiratory condition, who would need to learn a whole new method of operating their prescription treatment. Asthma + Lung UK recommends switching only if patients are sufficiently concerned about the possible environmental effects of inhalers, noting that switching should always be done in conjunction with their doctor.

The National Institute for Health and Care Excellence (NICE) has tried to clarify the confusing picture around inhaler propellants by producing a patient decision aid, recommending that “everyone should be able to choose the inhaler they find easiest to use.”

Asthma + Lung UK do, however, support the recycling of inhalers as a way to protect the environment. The majority of inhalers prescribed in the UK are not meant to be disposed of from home, since residual HFC gases are still released from inhalers that enter landfill. Instead, inhalers should be handed in to a retail pharmacy, if they are to be recycled correctly.

According to a UK-headquartered manufacturer of inhalers, pharmaceutical company GSK, 73 million inhalers are used in the UK every year. The company estimates that if all of these inhalers were correctly recycled at retail pharmacies, over the course of a single year up to 512 kilotonnes of additional CO2 eq emissions would be saved.

Several recycling initiatives shave been instituted in the UK, but to-date the process is not systematic and comprehensive. GSK’s own ‘Complete the Cycle’ inhaler-recycling scheme was scrapped in September 2020 after recovering over two million inhalers. Regardless of the positive benefits of recycling, NHS England stated in August 2021 that it had no plans for any form of NHS-led national inhaler recycling scheme, since it believed sufficient inhaler-recycling work was already carried out by retail and community pharmacies.

Find out more about PatientView’s research into Pharma and ESG: The Patient Perspective.